Our second day in Jakarta was also our first day of meetings. We had a packed schedule filled with visits to the U.S. Embassy at Jakarta, high-tech culture center @America, and human rights NGO KontraS. We all had some breakfast and eagerly headed out for a day of stimulating information-filled meetings.

Ambassador Robert O. Blake was our first scheduled appointment. Upon entering the highly secured Embassy, fortunately only a few minutes drive and a corner turn from our hotel, we were greeted by Cultural Affairs Officer Deborah Lynn, who then introduced us to the Ambassador. In the brief time we had together, we discussed social media engagement between the U.S. Embassy and Indonesian people, challenges of his work, and the priorities of the office in general.

2) Increasing investments between the countries

After a quick photo and a few tweets, we were off to our next destination: @America. On the third floor of Pacific Place, a luxury mall in the city, @America cultural center is a high-tech digital initiative by the State Department, the only one of its kind located solely in Jakarta. We were guided through a tour of the office, which featured American cultural icons from Bon Jovi to Katy Perry, a performing center, and even a Google Earth interactive booth. Our hosts, @American staff as well as Deborah and Press Officer John Johnson explained to us their goal of increasing Indonesian youth applying for and attending American school as international students. Their messaging strategy was clear and precise: painting American education as the “Gold Standard,” offering high quality learning and a promising future. Additionally, we discussed current programming of @America, much of which revolved around the pluralistic Indonesian motto of unity and diversity.

With an introduction to how the U.S. government is operating within Indonesia, the stage was set for our week of exploring the public diplomacy landscape of Indonesia. 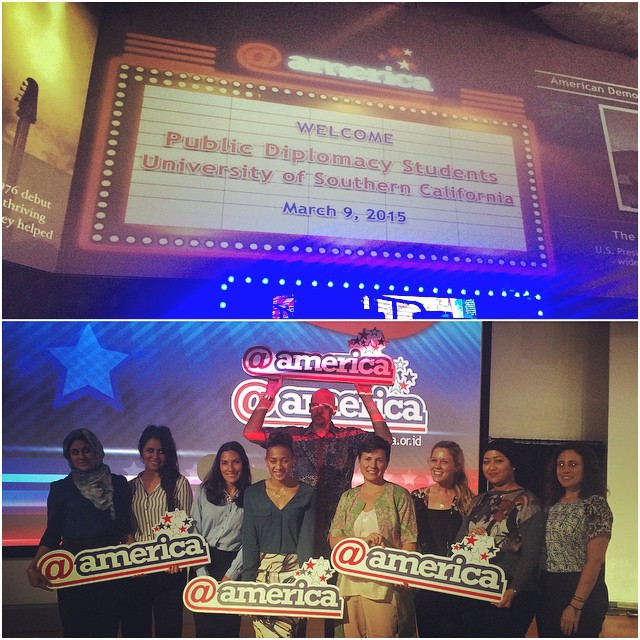